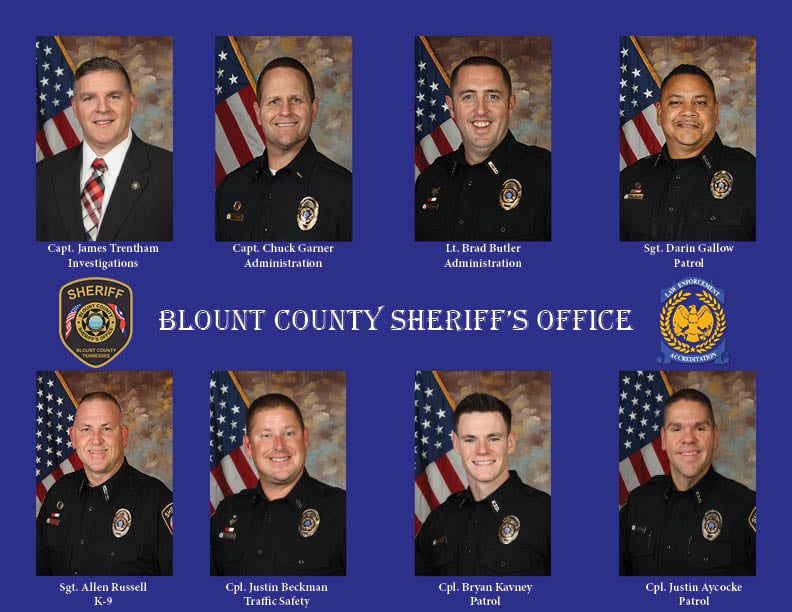 MARYVILLE, TENNESSEE – Sheriff James Lee Berrong is proud to announce eight newly promoted deputies. Capt. James Trentham, Capt. Chuck Garner, and Lt. Brad Butler resumed their new duties July 18. Sgt. Darin Gallow, Sgt. Allen Russell, Cpl. Justin Beckman, Cpl. Bryan Kavney, and Cpl. Justin Aycocke will all resume their new duties effective August 15.
Capt. James Trentham began his career at the Sheriff’s Office in 1996 and worked his way through the ranks in Patrol, K9, and Investigations. He was promoted to the rank of lieutenant in Investigations in 2015. He also serves as the agency’s polygraph technician.
Capt. Chuck Garner also started his career at BCSO in 1996 as a patrol and K9 deputy. He was promoted to the rank of corporal in 2001 and K9 sergeant in 2004. In 2014, Capt. Garner was promoted to administrative lieutenant, heading up the Field Training program and providing support in Operations.
Lt. Brad Butler was hired in 2011 as a patrol deputy from the BCSO Reserve Unit and attended the Sheriff’s Office Regional Training Academy. In 2014 he was promoted to corporal, and in 2016 he was awarded the rank of sergeant.
Sgt. Darin Gallow came to the BCSO as a veteran patrol officer and military veteran, serving in both the U.S. Marines and the Tennessee Air Guard. In 2016, he was promoted to the rank of corporal in patrol.
Sgt. Allen Russell is a long-time Sheriff’s deputy. He has served as the leader of the Sheriff’s Office K9 unit for many years, and is esteemed throughout the region as an expert K9 handler and trainer.
We are also excited to see our new corporals grow in their duties. Cpl. Justin Beckman was hired in 2007 in Corrections before attending the Sheriff’s Office P.O.S.T. (Peace Officer Standards and Training) in 2012. Following graduation from the P.O.S.T. academy, Cpl. Beckman served as a patrol and Traffic Safety deputy. Cpl. Justin Aycocke was hired in 2015 as a patrol deputy, graduating from the BCSO Regional Training Academy in 2015. Cpl. Bryan Kavney started his career at the BCSO in 2016 as a patrol deputy, graduating from the Sheriff’s Office Regional Training Academy the same year.
Press Release promotions