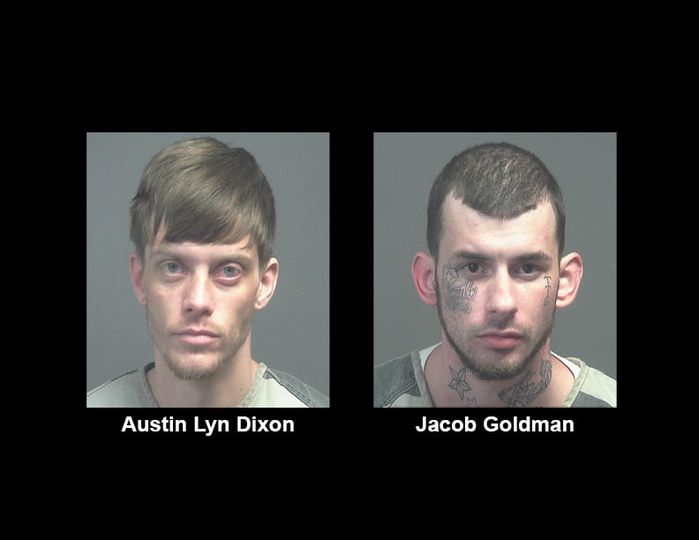 MARYVILLE, TENNESSEE – Blount County Sheriff James Lee Berrong said two men are in custody after a short foot chase following a traffic stop Wednesday that led to the recovery of two stolen vehicles.
The following individuals are in custody in the Blount County Correctional Facility:
• Austin Lyn Dixon, 26, Wildwood Road, Maryville, is being held on bonds totaling $122,500. Dixon is charged with evading arrest, theft of property between $10,000 – $60,000, simple possession of marijuana, simple possession of methamphetamine, theft of property over $10,000, a warrant for aggravated burglary, as well as failure to appear in court and violation of probation on prior charges.
• Jacob Goldman, 26, West Fulton Street, Alcoa, is being held on a $5,000 bond. Goldman is charged with theft of property.
Wednesday afternoon at approximately 3:15, a Blount County deputy was patrolling the area of Old Knoxville Highway when he spotted a Nissan Murano that was reported as stolen out of Jefferson County. The deputy followed the vehicle as it pulled into a business at the intersection of Old Knoxville Highway and Hunt Road and initiated a felony traffic stop on the vehicle. As the deputy gave the occupants voice commands to exit the vehicle, the driver, identified as Jacob Goldman, was taken into custody without incident. When the passenger stepped out of the vehicle, he fled on foot until deputies were able to take him into custody following a short foot pursuit. He is identified as Austin Lyn Dixon. When deputies began to investigate, they discovered the two individuals were involved with the theft of another vehicle that was reported as stolen – a 1997 Toyota Tacoma pick-up truck – and that it was at a location on Wildwood Road. Deputies located the other vehicle and learned it was reported stolen out of Cocke County.
During their investigation, deputies discovered approximately 3 grams of methamphetamine and a small amount of marijuana inside the Nissan Murano.
Dixon was also wanted by the Maryville Police Department on a warrant for aggravated burglary after he burglarized a residence in late December.
Dixon and Goldman are scheduled to appear in Blount County General Sessions Court at 9 a.m. January 18.