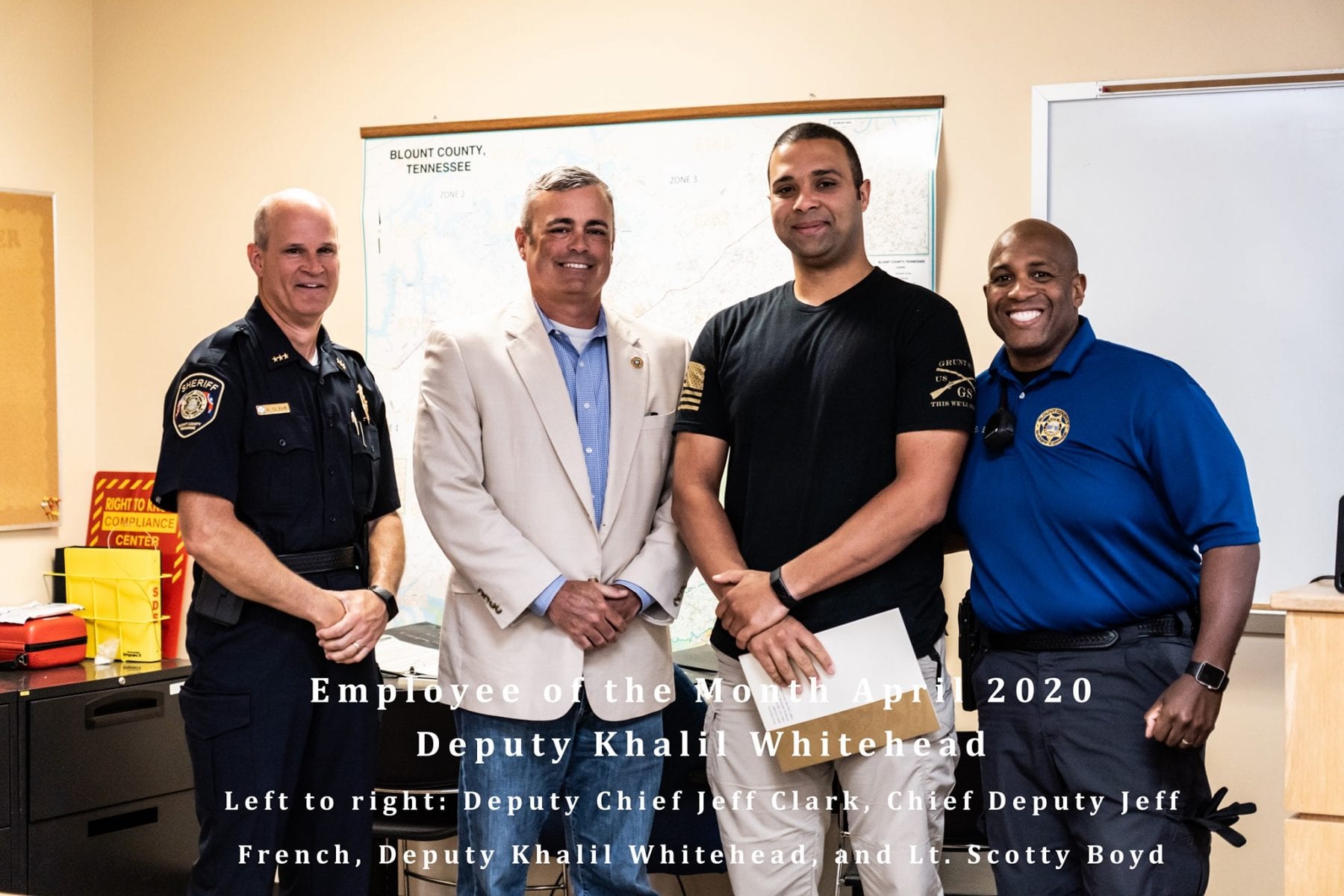 MARYVILLE, TENNESSEE – Several sheriff’s deputies were recognized for their lifesaving efforts and other deputies as employees of the month recently.
Deputy Rex Ogle received the honor of March Employee of the Month for intervening in a plot in March involving an unreported armed robbery that led to a group of individuals planning to do harm to the would-be robber. While on patrol on March 19, Deputy Ogle saw a vehicle with several people acting suspiciously and driving erratically. During the traffic stop, Deputy Ogle discovered a loaded weapon and a significant amount of cash, methamphetamine, and marijuana. He learned that one of the passengers had tossed another weapon from the vehicle and that the driver was being forced to drive to a secluded area and that the occupants were planning to harm the driver. Because of his proactive and reactive enforcement efforts, Deputy Ogle likely saved the driver from serious harm, and possibly saved his life. Deputy Ogle began his career at the Sheriff’s Office in January 2017 and serves as a patrolman. 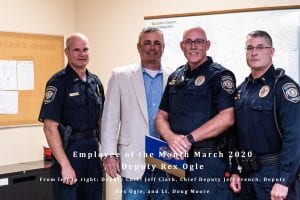 Deputy Khalil Whitehead was awarded our April Employee of the Month for intercepting two burglary bandits during the overnight hours on March 31. While on patrol on Carpenters Grade road, Deputy Whitehead saw a vehicle pulling a utility trailer with two lawnmowers that were not tied down. Due to his training and experience, Deputy Whitehead believed the lawnmowers could be stolen. He attempted a traffic stop on the vehicle, but the driver accelerated into a neighborhood and drove through several yards before stopping at a retention pond. Both individuals in the vehicle fled on foot. Deputy Whitehead immediately caught one of the suspects. During his investigation, Deputy Whitehead found that the suspects had stolen the trailer, a riding lawn mower, and a push mower from three locations. He was able to return the stolen items to the owners, and the suspect was arrested on multiple charges. Deputy Whitehead began his career with BCSO in January 2018 and attended Class 017 of the Sheriff’s Regional Law Enforcement Training Academy. He is assigned to patrol. 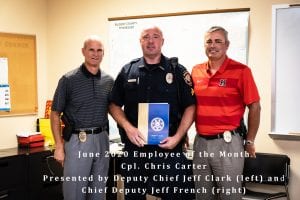 Cpl. Chris Carter received the honor as our June Employee of the Month for talking an armed man out of committing suicide. The incident occurred on June 17. He and other deputies responded to the call of a man who was threatening suicide. Cpl. Carter was the first to arrive on scene and he encountered a man armed with a pistol on the front porch of the residence. The man stood up and refused to put down the pistol or comply as he walked into the backyard. Cpl. Carter remained calm and continued to try to get the man to relinquish the gun while talking o him empathetically and encouraging him that the situation was going to be alright. Cpl. Carter placed himself in harm’s way in proximity to the man so that he could hear him and continue to talk to him directly in an effort to peacefully resolve the situation. The circumstances, the man’s actions, including having both hands on the pistol, and action versus reaction principles could have easily ended badly. Fortunately, the man finally complied after 30 minutes and released the gun. The man was taken for an emergency mental health evaluation. Cpl. Carter has been employed with the Sheriff’s Office since 2014, and was promoted to corporal in 2016. Cpl. Carter serves with the patrol unit.
The Sheriff’s Office also awarded two Lifesaving Awards and a Citizen Service Award. Deputy Patrolman Kendyhl Rodgers was awarded a Lifesaving Award for helping to save the life of a man who was trapped inside a vehicle that had become submerged upside down in the water on the night of April 21. Deputy Rodgers, along with a citizen, Mr. Scott Snipp, entered the water and freed the victim. Their actions likely saved the victim’s life. Mr. Scott Snipp also received the Sheriff’s Citizen Service Award for his actions. Deputy Rodgers began his employment with the Sheriff’s Office in 2017, and is assigned to patrol. 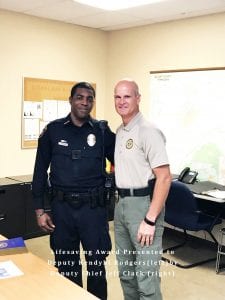 Our other recipient of the Sheriff’s Lifesaving Award is Deputy Patrolman Tim Pace. On April 22, Deputy Pace assisted Maryville Police Department on a motor vehicle accident at the intersection of Tuckaleechee Pike and East Lamar Alexander Parkway. Deputy Pace and Maryville Police Department Cpl. Elizabeth Riffle performed CPR on the victim until Maryville Fire Department and AMR Ambulance Service arrived. A paramedic with Maryville Fire Department said “The early actions taken by Deputy Pace and Cpl. Riffle likely facilitated a successful medical response providing critical, life-sustaining oxygenated blood throughout his cardiac system.” Had Deputy Pace and
Cpl. Riffle not intervened, it is likely the man’s prognosis would have been drastically different. Deputy Pace has been employed with the Sheriff’s Office since 2016 and is assigned to patrol. 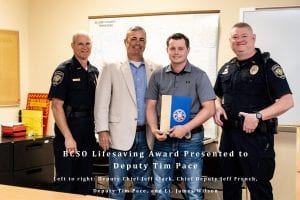 Sheriff James Lee Berrong is proud of each of these deputies and of Mr. Scott Snipp for going above and beyond!
Images courtesy of BCSO.
BCSO Blount County Sheriff Office lifesaving efforts Maryville Sheriff Berrong